Why a Definition Matters

Street Photography is a phrase that even many practitioners of Street Photography dislike. While superficially describing where the majority of street photographs are made it spectacularly fails in conveying the most important aspects of the approach. I have not been able to definitively locate the origins of the phrase Street Photography but I have found the phrase used as early as 1878 in an article from The British Journal of Photography (right).

The massive growth and popularisation of Street Photography has been fuelled by the digital revolution in two ways, the availability of cheap high quality cameras and the evolution of image sharing platforms and apps. The entry point for Street Photographers is now very low which all must agree is a good thing.

However, with this growth in popularity there has been a blurring of the lines between historical ideas of  what Street Photography is and what it has been popularised as being today by bloggers and online magazines and articles that include all sorts of photography in their definition from street portraits to staged and composited imagery.

This is all absolutely fine of course but it does present a problem for those that still value the candidly observed photograph from a public place. How do we now differentiate our work under the umbrella term that Street Photography has become.

It seems to me that Street Photography as a phrase now lets us down to some extent, it fails to identify the key aspects of our practice, namely that the work is shot without intervention, it is made in a public place (not necessarily the street) and it is a Photo Graph, drawn with light and not with a computer after the fact.

If you have studied photography you will be aware of the view that the photograph is a new object, ambiguous and disconnected from the scene it portrays as well as being filtered through the unique interpretation that the viewer brings to it. Some deny that a photograph can ever be a document.

This is why it sincerely matters how a Street Photograph was made, it’s historical, sociological and political value rely on it being an observed rather than a directed scene.
Its value as a document of our times is reduced when it is staged, composited or manipulated. Street Photographs like Press or Photojournalistic photographs are particular in this way because there is an expectation that they tell the truth as far as the photographer was able to achieve with the medium.

And so it is that Street Photography has come of age, it was born in Paris in the 1920’s, it grew and matured in New York in the 1960’s and 70’s and it has come of age as a global practice from 2000 onwards. There was a time when nobody questioned the veracity of a Street Photograph but we are now in a less naive time where artists like Jeff Wall have recreated street scenes with models or Peter Funch has composited dozens of street images into a single picture or Dougie Wallace instructs his subject to ‘Kiss The Dog’.

Now we don’t really know what we are looking at unless the photographer is clear about their practice and their intentions.

This leads me to the reason for this site and my suggestion that those who care about it employ a more accurately descriptive phrase to their observed work: Candid Public Photography, in order to declare unambiguously their intentions as photographers and let the rest of us know exactly what we are looking at. Ambiguity is for artists not documentarians.

These three words define in the broadest possible way what we as Street Photographers do, they have been adopted by the in-public group since the end of 2016 and I would urge you to consider using them when talking about your work and using the hashtag #CANPUBPHOTO on your site and social media feeds so others can be assured of your working practice.

PUBLIC ADJECTIVE: FROM THE LATIN, PUBLICUS, FROM POPULUS, THE PEOPLE. ABLE TO BE SEEN OR KNOWN BY EVERYONE, OPEN TO GENERAL VIEW.

PHOTOGRAPH VERB: FROM THE GREEK, PHÕTOS, LIGHT, AND GRAPHEIN, TO DRAW, TOGETHER MEANING ‘DRAWING WITH LIGHT’. 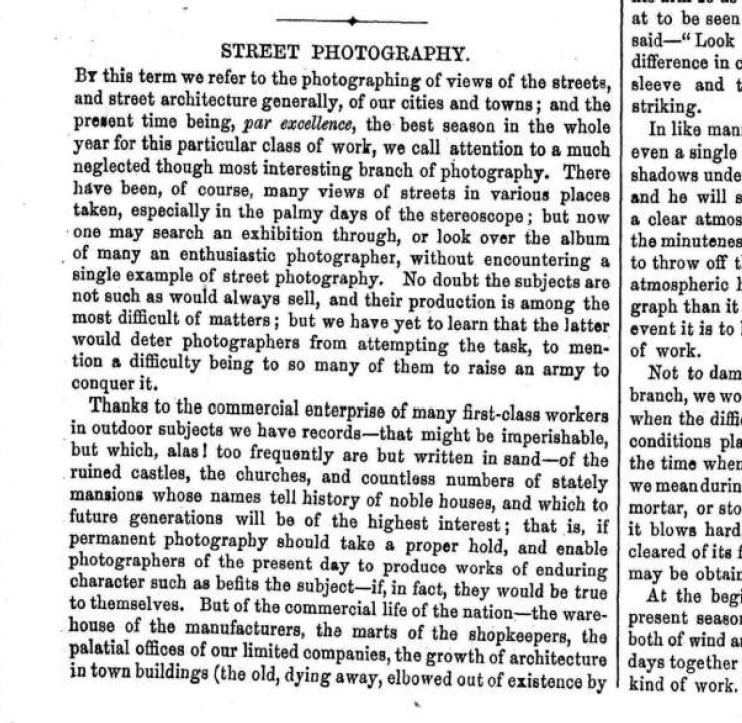